Male impersonators in the Music Halls and beyond! 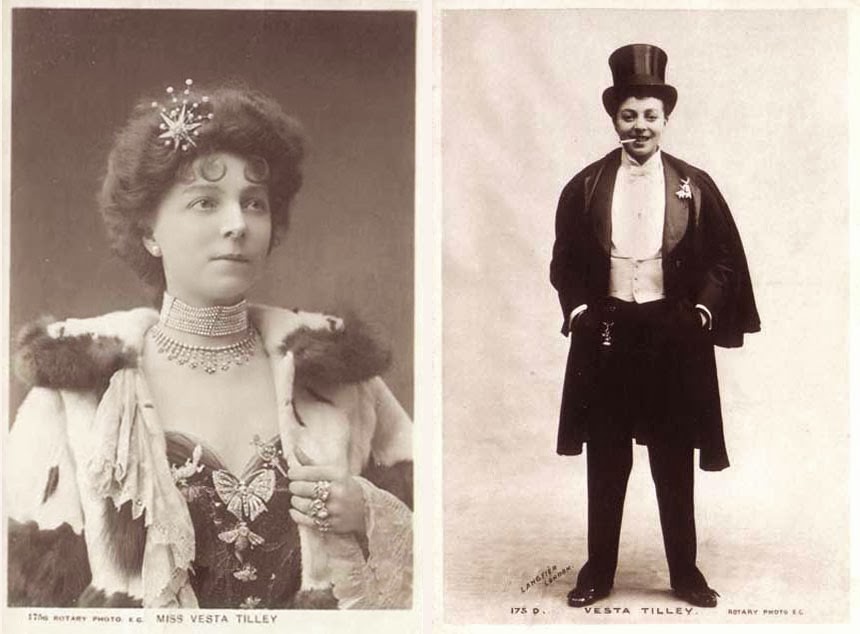 The male impersonators of the music hall performed to the backdrop of Victorian and Edwardian England with the conservative image of women as ‘beautiful, chaste, domestic creatures.’ (1) The male impersonators challenged the stereotypical female type ‘who in male guise, assumed the values of the ‘dominant’ sex and undermined them, with satirical lyrics and a parody of male mannerisms’ (2). Among the better known of these was Matilda Alice Powles (13 May 1864-16 September 1952), more commonly known as Vesta Tilley. 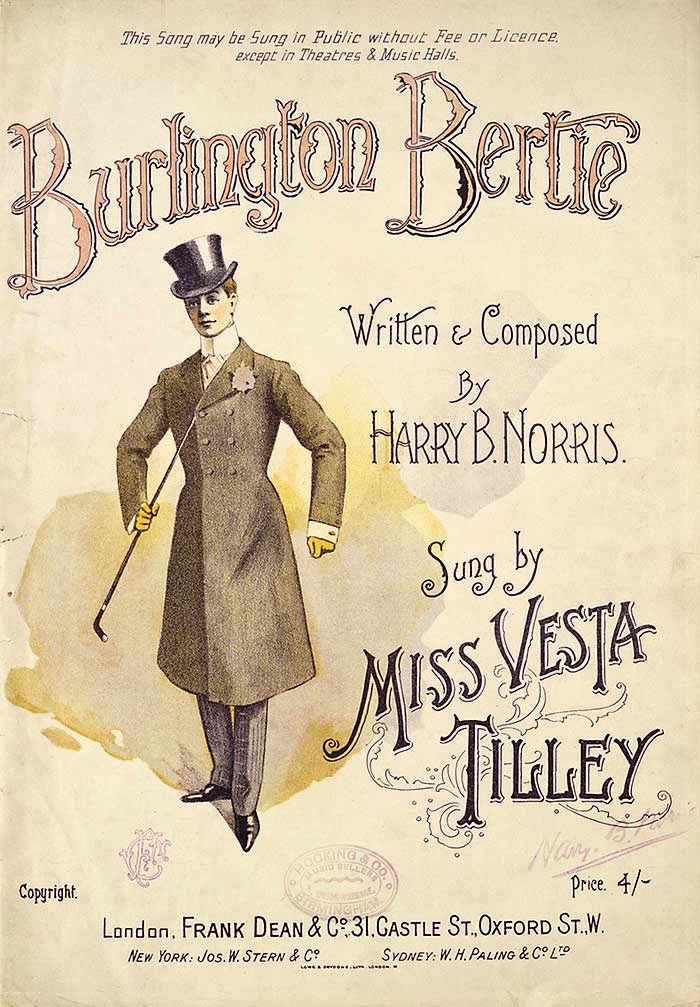 Tilley was considered to be the greatest male impersonator in British music hall. She first appeared on stage at the age of three and a half and by the age of six performed her first role in male clothing. Managed by her father, Tilley toured extensively around the UK and at aged 11 her salary supported her parents and siblings. As she grew older she continued to act as a male impersonator portraying young men behaving either embarrassingly or badly; among them was Tilley’s most famous character ‘Burlington Bertie’. Aside from more comical characters such as Bertie she also had a number of military figures which were most popular during the Boer War and the First World War. Tilley’s popularity reached its all time high during the First World War, when she and her husband ran a military recruitment drive. In the guise of characters such as ‘Tommy in the Trench’ and ‘Jack Tar Home From Sea’, Tilley performed songs such as The Army of Today’s All Right and Jolly Good Luck to the Girl who Loves a Soldier.

Although Vesta Tilley spent much of her working life dressed as a man in her personal life she was married to Walter de Frece, a music hall entrepreneur and the son of a theatre owner. A similar story is depicted in Sarah Walter’s novel Tipping the Velvet set in Victorian England during the 1890s. Although Kitty, a music hall male impersonator, declares her love for Nan and in fact has a sexual relationship with her, she eventually conforms to the norms of the era and marries Walter Bliss, her music hall manager. Kitty is afraid that otherwise she would not be a success in the music halls. 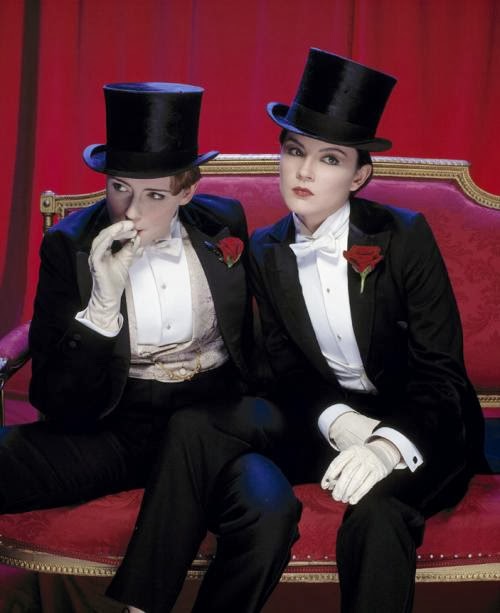 Interestingly when Nan takes to the stage with Kitty and they are both dressed in male attire Nan is too convincing as a boy. The realism doesn't quite work: they need another male impersonator, a girl in male clothes where the audience can still tell she is a girl; otherwise they would have used a real boy instead. Ironically enough, Walter feels obliged to tame Nan’s boyishness and make her look more girly! (3) It is commendable what Sarah Walters is doing here, toying with gender in relation to social spaces, showing how gender is shaped based on the level of social tolerance at the time.

Kitty and Nan experience a short period of love that does not last because of Kitty’s fear about her reputation - a fear that is triggered by the power of words and the articulation of the label ‘Tom’. A Tom, according to Kitty, means a girl who makes a career out of kissing other girls. (4) Kitty fears the word and rejects it as a label or identification of herself and her relationship with Nancy. Kitty’s fear of identification with the word Tom reaches a climax when a drunken man on stage calls her and Nancy ‘a couple of tomes!’ (5) The incident highlights the beginning of their failure on stage. It also drives Kitty to make a decision to hide away her queerness by marrying Walter and dismissing Nancy. It seems that it was okay to flirt with cross dressing in the context of popular entertainment if it was obvious still that you were a girl and if you were known to be heterosexual in your private life.

The perception that a woman performing on stage as a man was acceptable and often even ‘sexy’ has not been confined to the music hall of the Victorian era or to modern day novels depicting this time. Later in the 20th Century a number of Hollywood actresses, including Greta Garbo and Marlene Dietrich, flirted with dressing in male attire.

In the 1930 film Morocco, Dietrich was cast as a Cabaret singer. The film is best remembered for the sequence in which she performs a song dressed in a man’s white tie and kisses another woman, both provocative for the era. However, Dietrich was a glamorous femme fatale and in fact her role in Morocco led to her only Oscar nomination.

From the early 1950s until the mid 1970s Dietrich mainly worked as a highly paid cabaret artist performing in large theatres in cities across the world. Dietrich would perform half her show in an extremely feminine figurehugging dress and then the second part of her show in top hat and tails. This allowed her to sing songs usually associated with male singers. 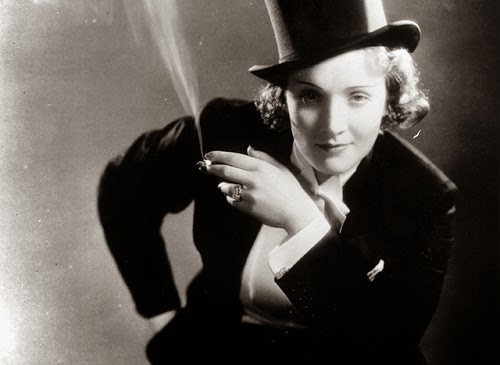 However, Dietrich kept her private life private. Although she married Rudolf Sieber, an assistant director, she was in fact bisexual and had a string of affairs with women including Mercedes de Acosta, who was Greta Garbo’s on-off lover. Of course this was not apparent at the time and only in later years has their relationship been discussed in any great detail publicly, although Garbo’s family, which controls her estate, has permitted only 87 letters to be made public that were written between herself and De Acosta.

In 1960 when De Acosta was seriously ill she published her memoir. Within the text there was implied homosexuality which resulted in the severance of several friendships with women who felt she had betrayed their sexuality. Garbo also ended their 30 year 'friendship' at this time. Again this has similarities to Kitty’s hastiness to be deemed as 'normal' and respectable in society where she ceases relations with Nan once she feels her position as a music hall performer is compromised by suggestions about her private life. Similarly when De Acosta released her memoirs, Garbo and others even though they had been friends with De Acosta for many years, chose to distance themselves from her and the rumours about their possible homosexuality by association with her.

So it seems that if a woman wanted to flirt with cross dressing in the early to mid-20th century and maintain social respectability, she still had to look like a woman. In Hollywood she had to be glamorous and it was better if she were married, even if this meant at the same time having a string of 'secret' lesbian affairs.