And about time too...

http://www.gaystarnews.com/article/lords-pass-bill-erasing-archaic-anti-gay-convictions130312
Posted by Chris Park at 11:14 No comments:

Paul and I recently spent a weekend in Marrakech to celebrate our 27th anniversary. We were well looked after by Tania and Zakaria, the owners of the Riad Libitibito (http://www.riad-libitibito.com/ - they deserve a plug for being so helpful and welcoming).

I hadn't realised that there was a connection in Marrakech to another, far more prominent gay couple. In 1980, Yves St Laurent and his former life (and long time business) partner, Pierre Bergé, bought the Jardin Majorelle and restored it. Their home in Marrakech, Oasis Villa, was nearby. 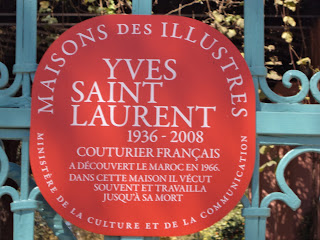 The gardens were originally designed by Jacques Majorelle, a expatriate French artist, in the 1920s and 1930s. They have been open to the public since 1947. The vivid blue used throughout the 12 acre site is referred to a bleu Majorelle, after the artist.

A few days before St Laurent died in 2008, he and Bergé were joined in a same-sex civil union known as a Pacte civil de solidarité (PACS) in France. St Laurent spent a great deal of time at the garden duing life and his ashes were scattered there after his death. There is also a memorial to him in a quiet corner of the garden. 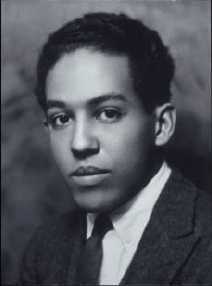 Born James Mercer Langston Hughes in Joplin, Missouri, he was a gay poet, writer and editor. Together with Countee Cullen, he was an important figure in the Harlem literary Renaissance of the 1920s.

A prolific writer, he used almost every conceivable form to arrange his thoughts on paper: poems, songs, novels, plays, biographies, histories and essays. Hughes wrote in many genres, but he is best known for his poetry, in which he used musical rhythms and the oral and improvisatory traditions of black culture.

In 1925, while working as a busboy in Washington DC, he left three of his poems by the plate of American poet Vachel Lindsay, who recognised Hughes's abilities and subsequently helped to publicise his work.

Beginning in the 1930s, Hughes was active in social and political causes and used much of his poetry as a vehicle for social protest. He wrote more than 50 books.

Hughes appears never to have had a significant lover-relationship, though his poem "F.S." (1921) suggests otherwise, and his autobiographical writings briefly mention sex with men. He wrote and published in all genres until his death but he never addressed homosexuality openly. His poems invite gay readings but his biographers disagree about his sexuality. He often said of his life, "There are some things I don't tell nobody, not even God. He might know about them, but it certainly ain't because I told him.”
Posted by Chris Park at 08:46 No comments:

http://www.gaystarnews.com/article/olympic-countdown-gay-heroes-speedos
Posted by Chris Park at 08:39 No comments:

http://www.polarimagazine.com/features/history-month-heroes-1-7
Posted by Chris Park at 07:30 No comments: