Over the next few pages, I have collated a few snippets about a number of LGBT Russians. Let’s start with: 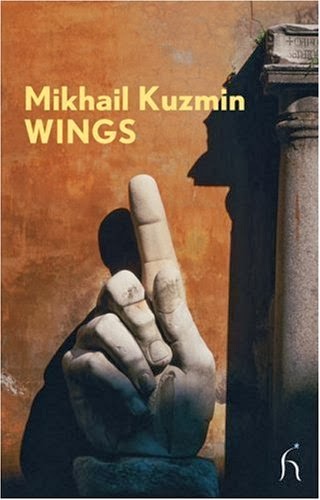 
Black the rooms of this unheated house;


We read the Bible and we wait


We wait. And do we know what for?

The Bolsheviks were never comfortable with human sexuality and much of the literature of the time treated homosexuality as a curable illness; however, criminalising sodomy was seen by the Bolsheviks as backward and bourgeois and allowed only in “lesser” republics like Turkmenistan and Uzbekistan. Finally Stalin, in 1933, approved Article 121 as part of his (Putin-like) return to “family” values, outlawing muzhelozhstvo coupled with a 5 year sentence, or worse.
"Pleshkas", gay cruising sites common during the Soviet period, were recently painted by artist Yevgeniy Fiks (4); ironically, pleshkas tended to be near Soviet monuments and statuary.

Many readers will be familiar with the well publicised goings on in Russia since the passage of this new law - LGBT people beaten in the streets, outspoken LGBT people fired from their jobs, adoption rights taken away, etc. This new law goes farther than any law before in Russian history and is much savvier than the bans in the past of simple muzhelozhstvo - the new law sets the terms of the conversation, determining that any discussion of gays necessarily includes a discussion of paedophiles and the protection of children while, because sodomy is not explicitly banned, the Russian government can maintain that there is no discrimination against gay people per se.

Sex in the Soviet closet: a history of gay cruising in Moscow
You might also be interested to read the following on the online paper, The Moscow News, by Joy Neumeyer, posted on 12 September 2013.
http://themoscownews.com/local/20130912/191916289/Sex-in-the-Soviet-closet-a-history-ofgay-cruising-in-Moscow.html

Notes:
1. Adapted (sllightly) from Randy Potts’s timeline on BoxTurtle Bulletin: http://www.boxturtlebulletin.com/2013/08/27/58473
2. http://en.wikipedia.org/wiki/Mikhail_Kuzmin
3. Radclyffe Hall's The Well of Loneliness was not published until 1928 and while EM Forster wrote Maurice in 1913-14, it was not published until 1971, after his death the year before. Wings is still in print and available for purchase.
4. http://yevgeniyfiks.com/section/371253_Pleshkas_of_the_Revolution_2013.html
5. http://english.gay.ru/
6. http://www.lgbtnet.ru/en - English language version.