Today is the 13th anniversary of the bombing attck by David Copeland on the Admiral Duncan pub on Old Compton Street in Soho.

Here is archive of articles, blogs and photos that have been posted by various people over the years:
http://172430notohatecrime.wordpress.com/soho-30/soho-archive/.

Further to a previous post, Dr Spitzer has now formalised his recent repudiation of his 2001 study and apologised to the gay community for the impact it has had. For more information and extracts from Dr Spitzer's letter of apology, go to: http://www.truthwinsout.org/news/2012/04/24542/.

The Bombing of the Admiral Duncan

The 30th April 2012 will mark the 13th anniversary of the Bombing of the Admiral Duncan, a popular pub on Old Compton Street in Soho. The following article appeared originally in the 2009 edition of Past2Present, original sources included Wikipedia.

The Admiral Duncan is a pub in Old Compton Street, Soho in the heart of London's gay district. It is named after Admiral Adam Duncan, who defeated the Dutch fleet at Camperdown in 1797. 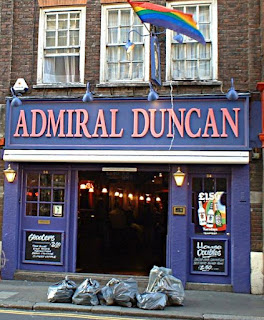 On April 30, 1999, the Admiral Duncan was the scene of a bomb blast when the Neo-Nazi National Socialist Movement member David Copeland, who was attempting to stir up ethnic and homophobic tensions by organising a series of bombings, detonated a nailbomb which killed three people and wounded around 70.

Eyewitnesses spoke of a "huge bang" as the bomb went off, hurling glass and debris into the street. Jason Everton had just left his job in nearby Frith Street to buy a sandwich, when he saw the front of the pub "coming straight off".

"There were people running out, all covered in dust and bruises and cuts. It was quite horrific," he said.

Jean Pierre Trevor, who was working in an editing suite in offices just behind the pub, was blown three feet by the force of the blast. He went to offer his help, and found the street outside "like a war scene".

"There were people lying everywhere," he said. "Those who were around were putting thermal blankets over them. A lot of them had severe burns, so we were putting water and ice cubes on their skin."

Nearby Soho Square, usually packed with office workers, became a makeshift treatment centre for the injured.

The dead were identified as Andrea Dykes (4 months pregnant); her friend, Nik Moore and John Light, the best man at the wedding of Andrea and her husband, who was himself seriously injured.

There is a memorial and a plaque in the bar to commemorate those injured and killed in the blast. 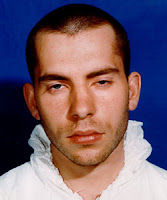 David Copeland, a 23-year-old engineer from Hampshire, was arrested at the beginning of May, and charged with murder and causing three explosions. During his trial, the court heard he told police he was a Nazi, and believed in a master race. The jury found him guilty, and he received six life sentences. Sentencing him, the judge said "The public must be protected from you, and assured that if you are ever released it will not be for a very long time." Almost 7 years later, on 2 March 2007, the High Court decided that Copeland should remain in prison for at least 50 years, effectively ruling out his release before 2049 at the age of 73.

In December 1881 a customer received eight years penal servitude for various offences in connection with his ejection from the Admiral Duncan pub by keeper William Gordon.

It was once in the ownership of the Scottish & Newcastle Brewery but changed hands in 2004 and is now owned by the Tattershall Castle Group, now known as TCG Acquisitions.

The exterior of the bar was repainted in a black and pink motif in late 2006.

In late 2005, Westminster City Council decreed that the Admiral Duncan and all other LGBT bars and businesses that operated in its jurisdiction, including those in Soho and Covent Garden, remove their pride flags claiming that such flags constituted advertising which was forbidden in its planning laws. Businesses would be required to apply for permits to be allowed to fly flags but those businesses that did apply for permission found their applications turned down for spurious reasons. Following media allegations of homophobia in the Council, the I Love Soho campaign and intense pressure from the Mayor of London, Ken Livingstone, the Council rescinded its directive and Pride Flags were once again permitted to be flown. 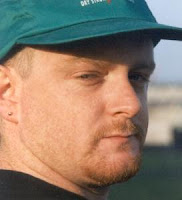 Bar manager David Morley, who survived the bombing, was murdered in London on 30 October 2004. A recently discovered portrait of the Chevalier, dating from 1792, is believed to be the earliest surviving formal portrait of a male transvestite.

For more information:
http://www.polarimagazine.com/visual-arts/patron-saint-transvestites
http://en.wikipedia.org/wiki/Chevalier_d%27Eon
Posted by Chris Park at 16:26 No comments:

Also
http://en.wikipedia.org/wiki/Human_Rights_Campaign
Posted by Chris Park at 08:18 No comments:

The Gay History of the High Five

It seems the 'high five' greeting, popularised first in the US amongst sportspeople, may have been invented by a gay man...

Thanks to @purplerights for tweeting this link.
Posted by Chris Park at 08:09 No comments: 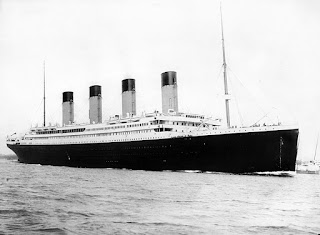 On the 100th anniversary of the sinking of the Titanic, historian James Gifford has published an essay that contains fresh speculation two of the ship’s most famous and fashionable passengers were gay.


http://www.outhistory.org/wiki/James_Gifford:_Archie_Butt
Posted by Chris Park at 17:09 No comments:

Thanks to @purplerights for tweeting this link.

This is an article on http://www.out.com about the Queercore movement in the late 1970s into the 1980s. It's largley US-centric, though there are some references to the UK. It uses quotes from people invovled in the movement to tell its story.

In a significant blow to “ex-gay” programmes and anti-gay organisations, Dr Robert Spitzer has repudiated his much-criticised 2001 study that claimed some “highly motivated” homosexuals could change from gay to straight. His retraction occurred in an American Prospect magazine article that hit news stands in the US today.

This is a big deal, as many of the "ex-gay" movement's organisations relied on Dr Spitzer's credibility. As one of the foremost people responsible for the removal in 1973 of homosexuality from the list of mental disorders in the Diagnostic and Statistical Manual (DSM) of the American Psychiatric Association, Dr Spitzer clearly 'had no axe to grind' and could not be said to have any part in the anti-gay agenda. You can imagine how this distressed the gay rights movement at the time. 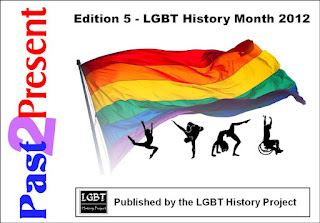 Who started the riot?

A documentary (currently final post-production stage - and looking for backers!) about "the Saint of Christopher Street", transsexual legend Marsha P. Johnson, has uncovered some interesting information about who may have started the Stonewall Riot in 1969...
http://blogs.villagevoice.com/dailymusto/2012/04/who_started_the.php

More information at
http://en.wikipedia.org/wiki/Stonewall_riots
Posted by Chris Park at 03:34 No comments:

Mike Wallace and 'The Homosexuals'

Mike Wallace, who died aged 93 on 7th April 2012, was a US journalist who in 1967 fronted the rather sensationalist documentary The Homosexuals. Years after the broadcast, he admited regretting that the film was not more balanced and sympathetic. 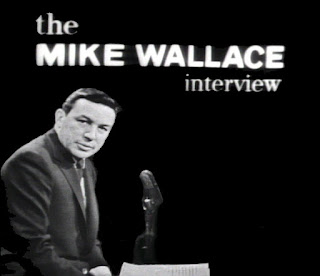 The documentary can be viewed at:
http://www.advocate.com/Society/Media/Mike_Wallace_and_The_Homosexuals/
Posted by Chris Park at 04:46 No comments:

... Sigmund Freud wrote to a distressed mother to say that 'homosexuality was nothing to be ashamed of'. See a scan of the actual letter (in English!!) here:
http://www.lettersofnote.com/2009/10/homosexuality-is-nothing-to-be-ashamed.html

With thanks to @LGBTSpace for tweeting this link.
Posted by Chris Park at 09:04 No comments:

A history of ILGA-Europe, the European region of the International Lesbian, Gay, Bisexual, Trans & Intersex Association.

http://ilga-europe.org/home/about_us/what_is_ilga_europe/our_history
Posted by Chris Park at 03:25 No comments:

I'm back after a rest from my labours during LGBT History Month. :o)

In a description of the molly houses first published in 1709, Ned Ward, an investigative journalist of the time, talks about mock ‘lying-in ceremonies’, at which men pretended to give birth and refers to the trial in 1709 of 9 gay men, who were arrested at a brandy shop near Jermyn Street (owned by a gay man) where they met regularly.

He may have embellished his facts to make them more sensational, but he did not wholly invent his material. The lying-in ceremonies are confirmed by other sources, including testimony given at trials, and this gay folk ritual crop up throughout the century. However, the mollies were not habitual transvestites. The cross-dressing and lying-in rituals that Ward describes occurred on "Festival Nights", generally towards the end of December. They were usually associated with masquerade festivals and may be similar to folk rituals that still take place today during Mardi Gras carnivals. The camp mimicking of women, however, was a feature of molly house gatherings.

Ward describes a group of ‘sodomitical wretches’ calling themselves the Mollies, who are ‘so far degenerated from all masculine Deportment, or manly Exercises’ that they mimic feminine behaviour even including the ‘Indecencies of Lewd Women’. The group apparently met every weekday in a particular tavern, unnamed so as to avoid fixing an ‘Odium upon the House’. They met to draw innocent youths into corruption and to have a good, and camp, gossip, such as women might after they had ‘laid aside their modesty for the Delights of the Bottle’.

On one festival night, they padded one of their ‘sister’s’ bellies and dressed ‘her’ in suitable nightwear. ‘She’ pulled faces and groaned as if in labour, then ‘gave birth’ to a wooden doll. Other ‘sisters’ played midwife, nurse and (female) neighbours to help the delivery. The ‘child’ was then christened.

Ward describes a whole scene of celebration, with a father and a parson present too, and a feast at which everyone was supposed to talk about their own ‘families’ as ‘Gossips are wont to do upon such Loquacitous (sic) Occasions’. The apparent purpose of this was to rid themselves of any sign of the ‘Natural Affection which is due to the Fair Sex, and to turn their Juvenile Desires towards preternatural Pollutions’.

After that, they washed up, entered into various ‘Beastly Obscenities’ and took such ‘infamous Liberties with one another’ that any normal man would be unable to consider without blushing.

Eventually, after some years, the group was ‘happily discover'd’ by agents of the Society for the Reformation of Manners. Several of the group were prosecuted, some fled to avoid the scandal. In any case, ‘the Diabolical Society were forc'd to put a period to their filthy scandalous Revels’.


SOURCE: "Of the Mollies Club," Chapter XXV of Edward Ward's Satyrical Reflections on Clubs. Thanks to: Rictor Norton, Ed., "The Mollies Club, 1709-10", Homosexuality in Eighteenth-Century England: A Sourcebook.
http://rictornorton.co.uk/