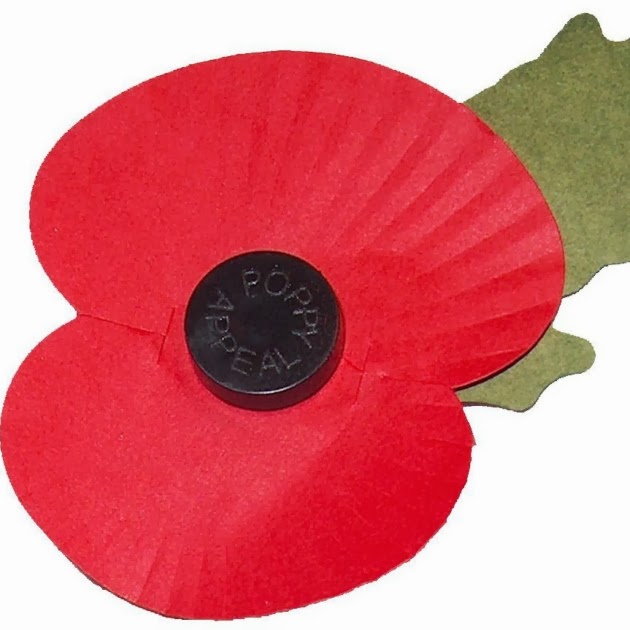 As the 100 year anniversary of the First World War approaches, the lives of those who served are being re-discovered and commemorated. An element of this that is often overlooked is the relationships between men serving alongside each other. Their camaraderie, close friendships and in some cases romantic love can be found in personal papers left behind, and the work of the war poets leave a particularly rich wealth of evidence.

Two of the most famous First World War poets met while convalescing in an Edinburgh hospital in 1917. Their close friendship and shared sexual orientation has raised the profile of gay soldiers fighting in the Great War and their experiences, both as soldiers and as men.

'Sweet and fitting it is'
In October 1915 a young man called Wilfred Owen returned to England from teaching in France to join the British forces. Full of the same belief in the war as the majority of his fellow volunteers, he stepped forward to defend King and country.

By late 1917, this same young man had become disillusioned with the purpose of war and all the horrors it entailed. He expressed his frustration through poetry, in what were to become some of the most well known personal records of the First World War.

In August 1914, another aspiring poet, Siegfried Sassoon, had enlisted to serve. Also soon disillusioned by his experiences, he put pen to paper and publically denounced British leaders and what he saw as their greedy intentions for the Empire.

In 1917, these two met, and their relationship and influence on each other had a long lasting effect on their work and the legacy of the war poets.

Owen was 22 years old and an aspiring poet when he signed up and was eventually Commissioned as an Officer in to the Manchester Regiment. His service record is held at The National Archives and tells of the trauma he suffered on the frontline (1). His letters home from the start of the war did not 'gloss over' his experiences for the sake of his family, like many others had. Instead he wrote to his mother of the brutal conditions he and his fellow servicemen existed in:
"Those fifty hours [in a tightly-packed dug-out] were the agony of my happy life… Every ten minutes on Sunday afternoon seemed an hour... I nearly broke down and let myself drown in the water that was now slowing rising over my knees." (2)

Owen suffered greatly on the front line and through his personal papers, poetry and service record describing his experiences in detail, they are better known than most others. Late one night in March 1917 he fell down a well and, suffering from concussion, was sent to recover at a casualty clearing station. A month after his return to active duty in April 1917, Owen was blown in to the air by an explosion while sleeping. He was subsequently trapped with the remains of a fellow officer, the experience of which haunted him long afterwards:
"… it was not the Bosche that worked me up, nor the explosives, but it was living so long by poor old Cock Robin (as we used to call 2/Lt Gaukroger), who lay not only near by, but in various places around and about…" (3)

Owen was eventually sent home to recover from ‘shell shock’, and was put in the care of Craiglockhart hospital in Edinburgh, where he met his friend and mentor, Siegfried Sassoon.

In contrast to Owen, who was yet to receive any acknowledgement of his work prior to the war, Siegfried Sassoon was a published poet when he joined up. In 1916, he was awarded the Military Cross for .“Conspicuous gallantry during a raid on the enemy’s trenches,” but was becoming more and more disillusioned with the war and what he saw as the 'greed' of authorities interested only in expanding the Empire. (4)

In July 1917, a letter was published in The Times by ‘S. Sassoon’ expressing his most anti-war sentiments. It was also read out in the House of Commons. (5)

“I am making this statement as an act of wilful defiance of military authority because I believe that the war is being deliberately prolonged by those who have the power to end it … I believe that the war upon which I entered as a war of defence and liberation has now become a war of aggression and conquest … I believe it may help to destroy the callous complacency with which the majority of those at home regard the continuance of agonies which they do not share and which they have not enough imagination to realise.” Sec. Lt. Siegfried Sassoon, 3rd Batt: Royal Welsh Fusiliers, July, 1917. (6)

This was a difficult turn of events for military authorities – a respected, decorated, published officer speaking out publically against the war – a political nightmare. Sassoon was in danger of being court-martialled, but thanks to his friend and fellow poet, Robert Graves, it was accepted that Sassoon's outburst could be blamed on ‘war neurosis’ and required treatment rather than punishment. (7) Thus, he found himself sent to Craiglockhart and in to the company of Owen.
Owen and Sassoon
Both Wilfred Owen and Siegfried Sassoon are widely considered to have had relationships with men, although there is no evidence to suggest they were romantically involved with each other.

Sassoon is more commonly known to have been gay, openly amongst his closest circle, having had affairs with well-known figures such as Ivor Novello, Stephen Tennant and Prince Philipp of Hesse, but constrained by the attitudes of his time as he expresses in his wish to write a book in 1921 (8): “It is to be one of the stepping-stones across the raging (or lethargic) river of intolerance which divides creatures of my temperament from a free and unsecretive existence among their fellow men.” (9)

His marriage to Hester Gatty in 1933 therefore surprised those friends who knew him, but the marriage broke down at the end of the Second World War. (10)

His diary records his feelings for men such as fellow poet Robert Graves: “there was some vague sexual element lurking in the background of our war-harnessed relationship. There was always some restless passionate nerve-wracked quality in my friendship with R.G.” (11)

Both Owen and Sassoon produced some of their most famous works while at Craiglockhart together. (12) Sassoon's work in particular reflected on the close ties forged in the trenches that many could never leave behind, such as the guilt displayed in his poem Sick leave.

On the contrary, Owen’s family, particularly his brother, are reported to have removed any evidence of his sexual orientation from his work and papers after his death. (13) Owen was besotted with Sassoon, telling his mother, "I am not worthy to light his [Sassoon's] pipe." (14) As Sassoon's biographer, Jean Moorcroft Wilson describes: "It is … highly likely that at his [Owen's] first sight of Sassoon, sitting on his bed in a purplish-blue dressing-gown, his hero-worship had tipped over into romantic love."

As Owen himself wrote to Sassoon in November 1917: "We have had some strong sunshine; and when it strikes anything blue I see you sitting by the bedside as on That Morning in September." (15) Wilson acknowledges that there is no evidence that Sassoon's feelings for Owen ever matched Owen's suggested romantic attachment. Sassoon viewed himself as the mentor, although he also benefitted from Owen's influence, if not in such a direct manner.

Owen greatly admired and was inspired by Sassoon's style of writing - his harsh reality reflecting his true experiences of war. The original copy of Owen’s famous poem 'Dulce et Decorum Est' (sweet and fitting it is) shows Sassoon's suggestions and alterations, illustrating his direct impact on Owen's work. (16)
Sassoon has been credited with mentoring and influencing Owen’s work to the point that Owen is now considered a better poet than Sassoon, and one of the strongest ‘voices’ of the First World War, although this may be influenced by his early death and Sassoon's later, less successful poetry. (17) It is Owen's inscription that marks the memorial of all the War poets in Westminster Abbey: “My subject is War, and the pity of War. The Poetry is in the pity.” (18)

Wilfred Owen was killed in action on 4th November 1918 while Sassoon was in England, permanently invalided out of service. Notice of his death reached his family on Armistice Day. Sassoon did not hear of his death for many months and always struggled to come to terms with it. (19) He later took on the role of editing Owen's poems to be published, ensuring Owen's success as one of England's greatest and most harrowing war poets long after his death. 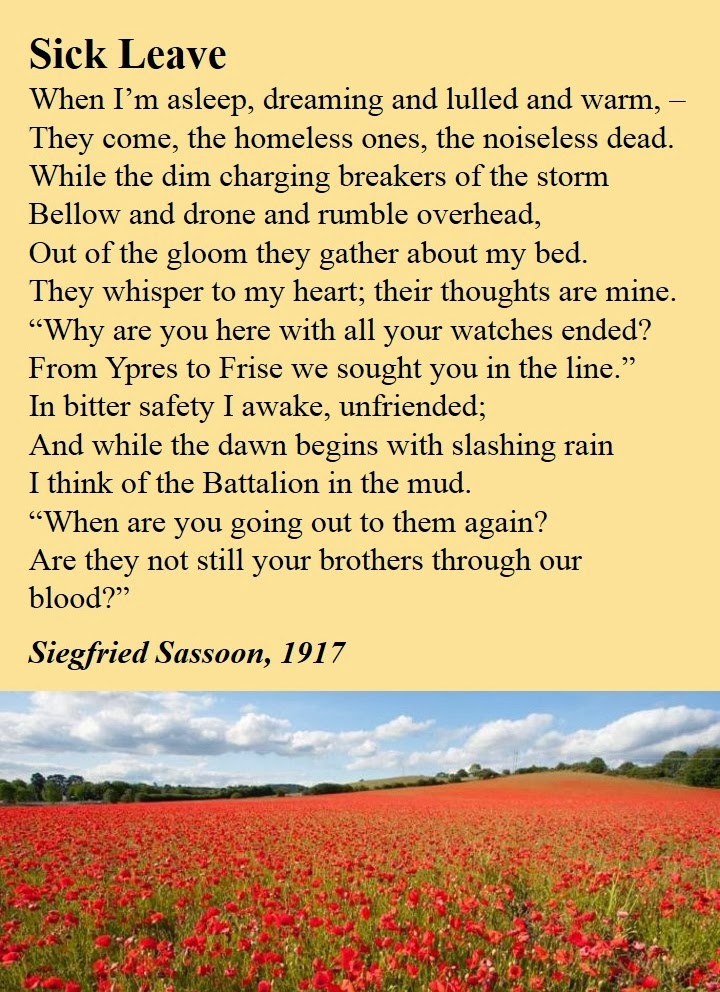