Thoughts on Gilgamesh and Enkidu by Chris Park

Gilgamesh was a historical king who reigned in the Mesopotamian city of Uruk in about 2750 BCE. He is the basis for the hero of the Epic of Gilgamesh, considered the oldest story in the world, a 1,000 years older than Homer’s Iliad or the Bible.

The first fragments were found in 1853, written in cuneiform on clay tablets found in the ruins of Nineveh, the ancient capital of Assyria. Cuneiform was not deciphered until 1857. In 1872, George Smith, a curator at the British Museum, realised that one of the fragments told the story of a Babylonian Noah. This stirred up a great deal of interest; the Victorians saw it as proof that the Great Flood had actually taken place. 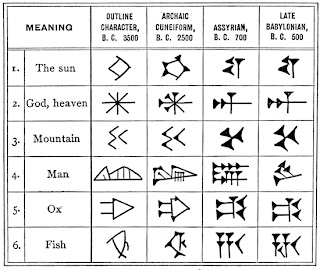 The Epic is set out on 11 clay tablets, only 3 of which are even close to complete. So early translations are full of gaps and speculations. Over the next 120 years or so, more fragments were found and the language better understood, providing more complete and more fluent translations.


The Epic tells of an arrogant king (Gilgamesh) whom the gods decide to tame by providing him with an equal (Enkidu). Some scholars describe him as his servant and others as his ‘beloved friend’. They have various adventures, one of which results in Enkidu dying. To say the least, Gilgamesh’s grief is over the top. He then goes on to try to discover a way to become immortal, as he doesn’t fancy going through the horrors of death, as Enkidu has. He fails. C’est la vie.
According to author Stephen Miller [see Gilgamesh - A New English Version by Stephen Mitchell, Profile Books, 2004.], there may have been more to Gilgamesh and Enkidu’s relationship than at first appears.

In any case, it seems that Gilgamesh let being the son of a goddess and king go to his head:
The city is his possession, he struts
through it, arrogant, his head raised high,
trampling its citizens like a wild bull.

Gilgamesh got a bit unbearable (he really liked to practise his Droit de Seigneur). The people of Uruk turned to Anu, sky god and father of the gods for help. Anu commanded the goddess Aruru to:
“go and create
a double for Gilgamesh, his second self,
a man who equals his strength and courage,
a man who equals his stormy heart.
Create a new hero, let them balance each other
perfectly, so that Uruk has peace.”

Aruru wet her hands, took some clay: and fashioned a man, a warrior, a hero:
Enkidu the brave, as powerful and fierce
as the war god Ninurta. Hair covered his body,
hair grew thick on his head and hung
down to his waist, like a woman’s hair.

Enkidu was a wild man who roamed the wilderness naked, “ate grass with gazelles” and “drank clear water from the waterholes”. A trapper, upset because Enkidu was destroying his traps and therefore his livelihood, reported him to the king. Gilgamesh advised him to seek Shamhat, one of the priestesses of Ishtar, who dedicated their lives to what the Babylonians considered the sacred mysteries of sexual union.

Shamhat accompanied the trapper and used her sexual expertise to lure and calm Enkidu. They then headed back to Uruk.

Along the way, Shamhat told Enkidu of a dream that Gilgamesh had had and which he had asked Ninsun, his goddess mother to interpret. In his dream, Gilgamesh saw a bright star shoot across the morning sky, then fall at his feet. It lay before him, a huge people of Uruk came out to see it. They kissed its feet. Gilgamesh took it in his arms, embraced and caressed it the way a man caresses his wife.

Ninsun said:
Dearest child, this bright star from heaven,
this huge boulder that you could not lift -
it stands for a dear friend, a mighty hero.
You will take him in your arms, embrace and caress him
the way a man caresses his wife.
She also called this person ‘the companion of his heart’.

However, their first meeting didn’t start off well. A young couple had just married and Gilgamesh was on his way to their home to take up his droit de seigneur. However, Enkidu blocked the doorway ‘like a boulder’. Gilgamesh got angry, there was a fight of epic proportions (lots of grappling and limbs intertwined). Although he won, Gilgamesh’s anger left him and he turned away. Enkidu said some nice things about how strong he was and it being right that he was king, then:
They embraced and kissed. They held hands like brothers.
They walked side by side. They became true friends.

The next extracts come after Gilgamesh and Enkidu have killed the monster, Humbaba, guardian of the Cedar Forest, appointed by the god Enlil to protect it by terrifying men away. You don’t kill a god’s appointed guardian without there being a cost. In this case, the cost was Enkidu’s life. He fell ill, took to his bed and then died.

When he heard the death rattle, Gilgamesh moaned
like a dove. His face grew dark. “Beloved,
wait, don’t leave me. Dearest of men,
don’t die, don’t let them take you from me.”

Gilgamesh mourns the death of his ‘beloved friend’ extravagantly:
Hear me, elders, hear me, young men,
my beloved friend is dead, he is dead,
my beloved brother is dead, I will mourn
as long as I breathe, I will sob for him
like a woman who has lost her only child.
[And more…]

But Enkidu did not answer. Gilgamesh
touched his heart, but it did not beat.
Then he veiled Enkidu’s face like a bride’s.

Some of the symbolism used in references to Enkidu is interesting. In his dream of Enkidu’s arrival, Gilgamesh saw a meteorite (the boulder that fell from heaven); the word used for meteorite is similar to the word for a cultic male prostitute involved in the worship of Ishtar. He also refers to him as ‘the axe at my side’; the word for axe is similar to the word for a cultic performer who [and I quote] ‘typically, as a eunuch, took the female role in the sexual act’. Some scholars take this as a two-fold prediction for Gilgamesh of the arrival of a close friend who would also be his lover.

Finally, an extract from Book XII. Not traditionally shown as part of the Epic, it is acknowledged to be connected and Mitchell quotes from it in his notes to the book. It describes the return of Enkidu’s ghost from the underworld. Enkidu says to his friend (although the translation is a bit rough):
“If I am going to tell you the rules of the Netherworld that I saw,
sit you down (and) weep!”
“[(So)] let me sit down and weep!” [Gilgamesh]
“[My friend, the] penis that you touched so your heart rejoiced,
grubs devour [(it) … like an] old garment.
[My friend, the crotch that you] touched so your heart rejoiced,
it is filled with dust [like a crack in the ground.]”

On this basis, while the Epic itself makes no direct reference to a sexual relationship between the two heroes, Mitchell feels that in the excerpt from Book XII ‘the genital sexuality is explicit’.
I know what I think - you can judge for yourself.