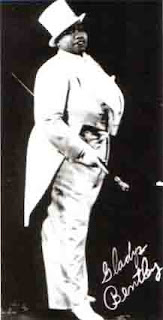 Gladys Bentley (1907-1960) was an American blues singer during the Harlem Renaissance of the 1920s and 30s.
Bentley was born in Philadelphia, Pennsylvania, the daughter of American George Bentley and his Trinidadian wife, Mary Mote. By her own account, her childhood in Philadelphia was not a happy one. She was a "problem child," taunted  by her peers for being overweight and a tomboy. In an interview in Ebony magazine late in her life, Bentley remembered having crushes on women in her early childhood; these infatuations apparently alarmed her parents, who may have sought medical help for their daughter.
At 16, Bentley left her parents' home and ran away to New York. At first she made a meagre living in Harlem as a pianist and singer, playing primarily for rent parties. In the 1920s, she appeared at Harry Hansberry's "Clam House", one of New York City's most notorious gay speakeasies, and in the early 30s headlined at Harlem's Ubangi Club, where she was backed by a chorus line of drag queens. She was a 250 pound woman dressed in men's clothes (including a signature tuxedo and top hat), who played a mean piano and sang her own raunchy lyrics to popular tunes of the day in a deep, growling voice while flirting outrageously with women in the audience. She cultivated her image as a "bull dagger", openly flaunting her lesbianism not only in performance but also in public. In a much publicised ceremony, she even married her white lesbian lover.
As the Harlem speakeasies declined with the repeal of Prohibition, she relocated to southern California, where she was billed as "America's Greatest Sepia Piano Player" and the "Brown Bomber of Sophisticated Songs". She was frequently harassed for wearing men's clothing. During .WWII, Bentley increasingly relied on bookings at night spots catering to a homosexual clientele.
From the 1920s on, Bentley was often the subject of gossip columns. She made a huge impression on several writers and memoirists. In 1945 Langston Hughes, in The Big Sea, referred to her as "an amazing exhibition of musical energy - a large, dark, masculine lady, whose feet pounded the floor while her fingers pounded the keyboard - a perfect piece of African sculpture, animated by her own rhythm." She was also probably the model for Sybil, the lesbian piano player in Blair Niles' gay novel Strange Brother (1931).
However in the 1950s the limited tolerance that had been eroding since the Great Depression, finally collapsed. The McCarthy "witch hunts" were particularly vicious towards homosexuals. Although lesbian and gay organisations like The Daughters Of Bilitis and The Mattachine Society were formed at this time, the lives of many homosexuals were ruined. Bentley, who during her early career had been one of THE most open as regards her homosexuality, was of course a sitting duck for persecution. Out of fear for her own survival (particularly with an ageing mother to support) Gladys Bentley started wearing dresses, and sanitising her act. In 1950, Bentley wrote a desperate, largely fabricated article for Ebony entitled "I am Woman Again" in which she claimed to have cured her lesbianism via female hormone treatments and was finally at peace after a "hell as terrible as dope addiction".
She also claimed to have married newspaper columnist JT Gibson (who soon after publicly denied the marriage). In 1952 she does seem to have married a man named Charles Roberts. He was a cook and 16 years her junior.
At about this time, Bentley became an active and devoted member of "The Temple of Love in Christ, Inc.". She was about to become an ordained minister in the church when she died of a flu epidemic in 1960 at the age of 52.