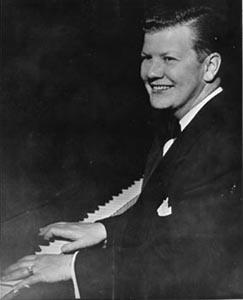 Jazz musician Billy Tipton was born Dorothy Lucile Tipton in Oklahoma City. Billy’s father was an aviator and car racer, his mother a housewife. They divorced when he was only 4 years old and Billy was sent to live with his aunt in Kansas City.

The move was vital in developing Billy’s future. His aunt taught him piano and a love for music. In the 1920s, Kansas City had a big jazz scene that, by the age of 16, was already influencing Billy. He began attending jazz clubs and knew playing piano and saxophone would be in her future.

At 18, Billy (still ‘Dorothy’ at that time) auditioned in several local jazz clubs. The club owners all said the same thing: Billy was very talented, but they simply would not hire a female. It was at this point in 1933 that Dorothy, with the help of her cousins, became Billy Tipton. (‘Billy’ had been her father’s nickname.)

Billy finished high school, but failed to ask for the graduation documents, as if already planning to leave his female birth identity behind. Early in his career, even when most of his friends still knew that he was female bodied, he obtained legal documents listing him as male, again suggesting he planned to live his life as a man.

Billy bound his chest, cut his hair, and wore a suit to the next audition. As Billy, he not only got the job but quickly became a success. Early on, Tipton cross-dressed only professionally, still living as a woman in private.

However, to keep playing jazz without discrimination or judgment, Billy continued to dress, and eventually lived the rest of her life, as a man.

During the 1950s, after playing saxophone for several bands, he began his own group, the Billy Tipton Trio with childhood friend Lou Raines and musician Bill Pierson. They became a quartet in 1954 by adding bass player Ron Kilde.

In 1956, a record agent heard the band in Santa Barbara and decided to sponsor their first album. Sweet Georgia Brown was quickly followed by a second album Billy Tipton plays HiFi on the Piano. In 1958, the band was offered a chance at national fame. They were given the position as house band in Reno, backing famous artists such as Liberace. Billy, against the wishes of the other members, turned the job down to work at a booking agency and to play at night. It is believed Billy feared the fame would reveal his "cross-dressing, lesbian lifestyle".

He did not seek fame, Billy Tipton simply desired to be free from scrutiny and free to play jazz. Residing in Spokane Washington with his family for many years, Billy played only occasionally in local night clubs.

There is some debate whether the many romances in Billy's life began as a cover, or whether Billy was ‘truly’ a lesbian. Billy was said to have had 5 "Mrs. Tiptons", women who though records have not been found, lived with Billy as man and wife. Even these woman, along with his 3 adopted sons remained unaware of Billy's ‘alternative’ identity as a ‘woman’.

Amazingly, Billy was able to keep his secret until his death. He kept his breasts bound by elastic bandages, explaining that his ribs had been broken in a car accident and the bandages helped prevent pain. He made love only in the dark, often half-clothed and ‘was deft at the use of a prosthetic device’.

Tipton died in 1989 and was "outed" by the coroner. Soon after, people speculated as to why a "woman" would live fifty-six years as a man, not telling even his wife and kids! The possibility that he may be transgendered did not enter their thoughts

All of Billy's wives stressed the fact that Billy was not fond of physical affection, and they simply accepted that as part of the relationship. After the discovery, friends and family members, though obviously shocked, only had kind words to say about Billy. One of the sons responded, that he will only think of his father "simply as Dad."

His biographer, Diane Middlebrook, in Suits Me: The Double Life of Billy Tipton says: “For the rest of her life, Tipton bound her large breasts, dressed like a man and made love to women. But when she visited her family, Billy always became Dorothy again. Was Tipton a lesbian? Was she truly female? Would it be accurate to call her a transsexual?

“I think the Tipton story is about the indeterminacy of gender identity. It’s not that Tipton was born into the wrong body. Rather, her sexual identity became an exquisite act, a delightful invention that merged with her life on the stage. You can understand her as someone who chooses her self-presentation in the face of options. You can’t draw a bottom line with her about identity, because she’s so adaptable. She could enjoy the fact that here, she’s this, and here, she’s that.”

Billy Tipton’s body was cremated, and so many questions about Billy’s identity will never be answered. Middlebrook is certain Tipton wasn’t an hermaphrodite nor was she a transsexual. Rather, she was an actor, Middlebrook says. “I believe Billy’s relationship to herself was female. She was the actor; he was the role. Billy clearly was a sexy man. There’s no question he was a heterosexual guy.”

Written by Chris Park, based on information at:
http://en.wikipedia.org/wiki/Billy_Tipton
http://andrejkoymasky.com/liv/fam/biot2/tipton01.html
Posted by Chris Park at 08:16