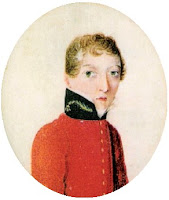 James Barry was born some time around 1792-1795 and died in 1865. He was a military surgeon in the British Army. After graduating from the University of Edinburgh, Barry served in India and Cape Town. By the end of his career, he had risen to the rank of Inspector General in charge of military hospitals. In his travels he not only improved conditions for wounded soldiers, but also the conditions of the native inhabitants.
Although Barry lived his adult life as a man, his biological sex is disputed. It is believed that Barry was born female as Margaret Ann Bulkley and chose to live as a man to be accepted as a university student and be able to pursue his chosen career as a surgeon. If so, Barry was the first female Briton to become a qualified medical doctor. It has also been theorised that Barry was intersex.
Evidence indicates that Barry was born in Ireland, the child of Jeremiah and Mary-Ann Bulkley. Her mother was the sister of the celebrated Irish artist and professor of painting at London's Royal Academy, James Barry. Letters suggest a conspiracy between Barry's mother and some of his uncle's influential, liberal-minded friends to get him into and through medical school.
Barry was accepted into the University of Edinburgh as a 'literary and medical student' in 1809. A financial record from the family solicitor shows that Margaret Bulkley travelled with her mother to Edinburgh by sea at the end of November 1809. A letter by James Barry to the same solicitor, sent on 14 December, in which he asks for any letters for him to be forwarded to Mrs Bulkley, mentions that '...it was very usefull [sic] for Mrs Bulkley (my aunt) to have a Gentleman to take care of her on Board Ship and to have one in a strange country...', indicating that this was when the change of gender was made. Although the letter was signed by Barry, the solicitor wrote on the back of the envelope 'Miss Bulkley, 14th December’.
Barry qualified with a Medical Doctorate in 1812, then moved back to London. Here he signed up for the Autumn Course 1812-13 as a pupil of the United Hospitals of Guy’s and St Thomas'. On July 2, he successfully took the examination for the Royal College of Surgeons of England, subsequently qualifying as a Regimental Assistant.
Barry was commissioned as a Hospital Assistant with the British Army on July 6, 1813, taking up posts in Chelsea and then the Royal Military Hospital in Plymouth. He may have served in the Battle of Waterloo. After that he served in India and then in South Africa, arriving in Cape Town between 1815 and 1817.
In a couple of weeks he became the Medical Inspector for the colony. During his stay, he arranged for a better water system for Cape Town and performed one of the first successful Caesarean sections - the boy was christened James Barry Munnik. He also gained enemies by criticising local handling of medical matters. He left Cape Town in 1828.
His next postings included Mauritius in 1828, Trinidad & Tobago and the island of St Helena. In St Helena he got into trouble for leaving for England unannounced. Later he served in Malta, Corfu, the Crimea, Jamaica and in 1831, Canada.
By this time he had reached the rank of Inspector General, HM Army Hospitals. However, during his next posting in Saint Helena he got into trouble with the internal politics of the island, was arrested and sent to home and demoted to Staff Surgeon. His next posting was the West Indies in 1838.
In the West Indies he concentrated on medicine, management and improving the conditions of the troops and was later promoted to Principal Medical Officer. In 1845, Barry contracted yellow fever and left for England for sick leave in October.
Barry was posted to Malta in late 1846. During his stay he had to deal with the threat of a cholera epidemic that eventually arrived in 1850. He left Malta for Corfu in 1851 as a Deputy Inspector-General of Hospitals and in 1857 went to Canada now an Inspector-General. In that position, he fought for better food, sanitation and proper medical care for prisoners and lepers, as well as soldiers and their families.
James Barry retired in 1864, reputedly against his wishes, and returned to England. He died from dysentery in July 1865 and the charwoman who took care of the body, Sophia Bishop, was the first to discover his female body. She revealed the truth after the funeral. Many people claimed to "have known it all along". The British Army sealed all records for 100 years.
He was buried in Kensal Green Cemetery with the only name he was ever known by and with full rank. His manservant, John, subsequently returned to Jamaica. 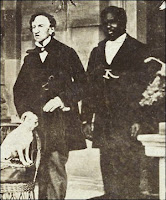 Barry was not always a pleasant fellow to be around. He could be tactless, impatient, argumentative and opinionated. He reputedly fought a couple of duels when someone commented on his voice, features or professionalism. He was punished many times for insubordination and discourteous behaviour but often received lenient sentences. During the Crimean War, he got into an argument with Florence Nightingale.
He appears to have had a good bedside manner and professional skills. He tried to improve sanitary conditions wherever he went and to better the conditions and diet of the common soldier. He reacted indignantly to unnecessary suffering. These traits annoyed his peers. He was a vegetarian and teetotaller, yet reputedly recommended wine baths for some patients.
Source:
http://en.wikipedia.org/wiki/James_Barry_%28surgeon%29

UPDATED on 21 November 2013:
Jenni Orme, who works in Archives and Records Knowledge at The National Archives and is a member of the LGBT History Project, has put online some documents about James Barry. They include the Letter Patent which appointed him as an Inspector General of Hospitals and some correspondence regarding the question of his gender.
Jenni Orme, Archives and Records Knowledge
http://www.exploreyourarchive.org/explore-your-archive-the-strange-case-of-dr-james-barry.asp
ENDED