Burke Proposes Abolition of the Pillory, 1780 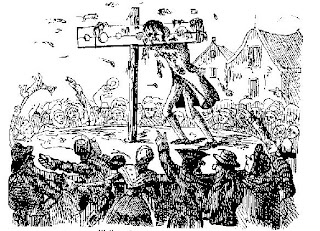 On Monday 10th April 1780, two men were convicted of sodomy and sentenced to stand for an hour in a pillory ‘near the obelisk’ in London. Theodosius Reade was a plasterer and William Smith a Hackney coachman. After about half an hour of appalling treatment by the mob, according to one account Smith was hit on the head by his ear by a stone and fell over dead. Another account suggests that he sank down and tried to strangle himself ‘till he appeared black in the Face, the Blood gushing from his Ears’.

Reade managed to get through the hour, but ‘was so severely treated, that it is doubtful whether he will recover’. It is not entirely clear whether Reade eventually died or not of his injuries.

For conservative statesman, Edmund Burke this seems to have been the final straw. He gave a speech in Parliament the next day proposing the abolition of the pillory. He argued that the ‘wanton cruelty of the mob’ and the negligence of those in charge of the pillory meant that the lawful sentence had been exceeded. On that basis, he felt that use of the pillory ought to be abandoned. He was supported by Sir Charles Bunbury who cited the case of a man in Bury St Edmunds, also sentenced to be pilloried for sodomy, who so feared the mob’s reaction that he took poison the night before. However, he was still pilloried and ‘whether he died from the poison, or in consequence of his ill treatment from the mob, had never been ascertained’.

Over the next few days, editorials in the Morning Post and Daily Advertiser were aimed against Burke, referring to him as ‘the advocate of the guilty’ and ‘displaying his talents to obtain mercy for sodomites!’ they also claimed that ‘every man applauds the spirit of the spectators, and every woman thinks their conduct right.’

A few days after the incident, a Coroner’s Inquest into Smith’s death brought in a verdict of Wilful Murder by a person or persons unknown. Also, interestingly, at least one newspaper reported that Reade’s maidservant was imprisoned for accusing him [presumably falsely] of ‘the Practice of which he was convicted and sentenced’. The maid was also pilloried.

The Attorney General ordered an inquiry into the deaths and, as a result, the Under-Sheriff of Surrey was tried, but acquitted. Burke was able to secure a pension of £36 a year on the Civil List for the widow of William Smith. The pillory was not abolished until 1816 (except as punishment for subornation and perjury) and not totally abolished until 1837.

NOTE: Edmund Burke (1729-97) was a hugely influential Anglo-Irish politician, orator and political thinker, notable for his strong support for the American Revolution and his fierce opposition to the French Revolution.
Posted by Chris Park at 12:46