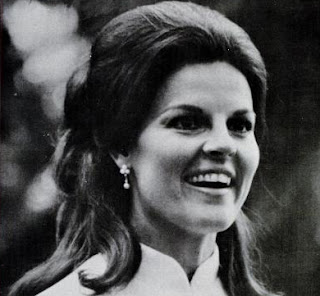 Anita Bryant was responsbile for possibly one of the most unpleasant anti-gay campaigns in the US in the late 1970s. In 1977, she led a, sadly, successful vote to repeal Miami-Dade's gay-rights ordinance. At the time she was a popular singer with appearances on TV. She appears to have been making very good money, and was at one point worth several million dollars.

On 26 January this year, her husband of the time, Bob Green, was found dead at his home in Miami Beach, aged 80. This gives us an opportunity to reflect on the impact on them of Bryant's campaign.

As you may imagine, their activities attracted the attentions of gay rights campaigners, so that Bryant found herself frequently on the receiving end of a 'zap'(1) and even on one occasion got a pie in the face on TV. The regular zapping led to them losing work and lost Bryant a TV series, which was to have been sponsored by Singer Sewing Machines. That didn't deter them - they set up Anita Bryant Ministries to counsel gay people ['ex-gay', rather than supportive, would be my guess] and built a radio studio for a planned Anita Bryant Christian show

In 1980, Green came home one day to find Bryant was gone. The breakup caused many of her religious conservative folowers to abandon her, accusing her of not being a good role model. The ministry failed and the radio show never happened.

Green became a recluse and lived, resentful, in Florida. "Blame gay people? I do. Their stated goal was to put [Bryant] out of business and destroy her career. And that's what they did. It's unfair.''

(1) - zap (fr hip sl // onomatopoeic comic bookese) to embarrass publicly; defeat; cause a disturbance, such as by boycotting [from The Queen's Vernacular: A Gay Lexicon by Bruce Rogers]