The Curious Case of Lady Stella and Miss Fanny

On 28 April 1870 Lady Stella Clinton and Miss Fanny Winifred Park, otherwise known as Ernest Boulton (22) and Frederick William Park (23), attended a performance at the Strand Theatre, London, in full evening frocks. The police had been observing since 1869, and they were arrested, together with another man, while two of their associates escaped.
All of the men lived at separate addresses, but jointly kept a house where they would dress up before going out for the evening and where they sometimes stayed with friends for a day or two at a time. 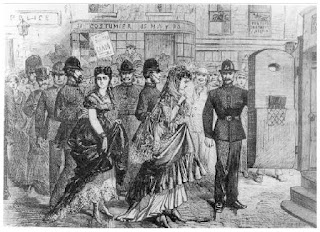 The police inventory included 16 satin and silk dresses, a dozen petticoats, 10 cloaks or jackets, various hats and other feminine accoutrements. Their landlady described their dresses as "very extreme."

Boulton and Park played female parts in amateur theatricals in legitimate theatres, country houses and elsewhere. Earlier that month Fanny and Stella had attended the Oxford and Cambridge boat race, as women. They also frequented the theatres and Burlington Arcade dressed as men, but wearing make-up, winking at respectable gentleman, which was what had initially attracted the attention of the police.
They were arrested for appearing in public in women's clothes, a misdemeanour, but after a police surgeon examined them they were charged with "conspiracy to commit a felony" (ie. sodomy). Their initial appearance in the dock was startling; Boulton, with wig and plaited chignon, wore a cherry-coloured silk evening dress, trimmed with white lace, and bracelets on his bare arms, while Park, his flaxen hair in curls, wore a dark green satin dress, low necked, trimmed with black lace, and a black lace shawl, and a pair of white kid gloves.
The court was besieged by an enormous crowd through the committal proceedings, and the trial (The Queen v. Boulton, Park and Others) continued throughout most of May the following year.
One person connected with the case was Lord Arthur Pelham Clinton, MP, third son of the Duke of Newcastle. Boulton claimed "I am Lady Clinton, Lord Arthur's wife," and showed the wedding ring on his finger. Lord Arthur lodged near him, paid for Stella's hairdresser who came every morning, and had ordered from the stationers a seal engraved "Stella" and even visiting cards printed "Lady Arthur Clinton".
Lord Arthur's name was on the original indictment, but he died on 18 June 1870, age 29, before the case came to court, reportedly from scarlet fever exacerbated by anxiety (but in fact suicide). One full day during the trial was spent reading out more than a thousand letters by the defendants, most of which still exist in the National Archives. But conviction of conspiracy to commit a felony could not be sustained without proof of the actual commission of the felony; even the prosecution came to feel that all the evidence merely pointed to disgraceful behaviour.
It has been argued that the jury either did not comprehend the existence of the gay subculture (they certainly missed the meaning of the gay slang in the letters), or that they wilfully blinded themselves to the subversive facts of life. All the defendants were acquitted, to loud cheers and cries of "Bravo!" from the gallery.

Source: excerpts from: My Dear Boy: Love Letters through the Centuries (1998), Edited by Rictor Norton
Posted by Chris Park at 07:17