My candle burns at both ends;
It will not last the night;
But ah, my foes, and oh, my friends--
It gives a lovely light! 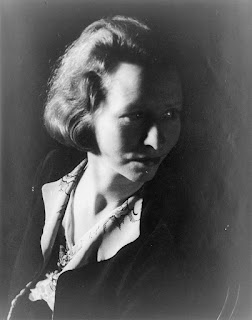 Probably best known for her poem "First Fig" (above), Edna St Vincent Millay (Vincent to her close friends) was born in Maine. In 1923 she became the first woman to receive the Pulitzer Prize for Poetry. Her volume of poetry A Few Figs from Thistles was controversial for its descriptions of female sexuality and feminism and for putting forward the idea that a woman has a right to sexual pleasure and no obligation to fidelity.

At high school she wrote for and edited the school magazine. Her mother encouraged her to enter her poem "Renascence" into a poetry competition where it won 4th place. The poem was published and she gained literary recognition and a scholarship to attend Vassar College.

While at Vassar, Millay had relationships with a number of women including English actress Edith Wynne Matthison, who was twice her age. They wrote to each other; in one of the letters Millay said: 'You wrote me a beautiful letter. I wonder if you meant it to be as beautiful as it was. I think you did; for somehow I know that your feeling for me, however slight it is, is of the nature of love... .When you tell me to come, I will come, by the next train, just as I am. This is not meekness, be assured; I do not come naturally by meekness; know that it is a proud surrender to You.'

Millay graduated in 1917 and in the same year published her first book, Renascence and Other Poems. She was commissioned by Vassar’s drama department to write a verse play. The result was The Lamp and the Bell, once described as .“having a strong undercurrent of lesbian love”. The story concerns Bianca and Beatrice, devoted stepsisters separated by a male suitor. Bianca was based on Charlotte Babcock, a woman with whom Millay was infatuated. A character in the play says of the stepsisters "I vow I never knew a pair of lovers/ More constant than these two."

Millay then went to live in New York’s Greenwich Village where she led a Bohemian life. She was openly bisexual, having numerous affairs with both men and women. Her first male lover was Floyd Dell who “felt it was his duty to rescue her from her homosexuality”. He was upset that she still had affairs with women after their relationship ended. Millay turned down his marriage proposal. He told an interviewer, "It was impossible to understand [Millay]....I've often thought she may have been fonder of women than of men."

In January 1921 she went to Paris and met Thelma Wood, with whom she had a romantic relationship. Although she described herself as a sculptor, Wood is better known for her usually unstable lesbian relationships with other famous women of the time.

In 1923 Millay married widower Eugen Jan Boissevain. They had a sexually open marriage and whilst it is well known that she had affairs with men, there seems to be no evidence that she continued to have sexual involvements with women, although it is quite possible as she said that they lived like "two bachelors". In 1925 they bought and moved into a farmhouse named Steepletop near Austerlitz, New York.

Boissevain died of lung cancer in 1949. Millay, a heavy drinker, now became even more dependent on alcohol. On 19 October 1950, she was found dead having fallen down the stairs at Steepletop. The cause of the fall is unknown.

Millay’s poetry was recently brought back to the public’s attention by Sheila Hancock, who wrote in her autobiography about the way that one of Millay’s sonnets helped her after the death of her husband, fellow actor John Thaw.

In Great Companions, Max Eastman relates an interesting story about Millay that, if true, reveals something of her attitude about her own sexuality. According to Eastman, while at a cocktail party Millay discussed her recurrent headaches with a psychologist. He asked her, "I wonder if it has ever occurred to you that you might perhaps, although you are hardly conscious of it, have an occasional impulse toward a person of your own sex?" She responded, "Oh, you mean I'm homosexual! Of course I am, and heterosexual, too, but what's that got to do with my headache?"